In Ireland, December 26 is known as St. Stephen's Day, traditionally a time when the Wren Boys would pay a visit. A group of young lads of a townland would disguise themselves and go from house to house in the parish carrying a holly bush on which they perched a wren they had captured and killed. With traditional instruments, they'd dance and sing:

The ritual of the Wren Boys in Ireland is said to have various origins. Perhaps the most popular version is that during penal times, when Catholic rights were restricted, the song of the wren alerted English soldiers to the approach of Irish rebels. The practice of the Wren Boys is an old medieval custom in much of western Europe, however, and is likely of much older beginnings. Another account tells of the wren song spoiling an Irish ambush of Norse invaders in the 8th century. A different story says that the song of the wren betrayed St. Stephen's hiding place to those who were pursuing him. Yet even earlier accounts may be rooted in older, pagan times.

Like most traditional rural customs in Ireland, the practice of the Wren Boys is fast fading into a misty past as the modern world colors all things anew with its global digital imprint of instant communication. Yet with the coming of such progress we all, I think, have lost another of the few remaining links to our agrarian past. Those of us born and bred in cities had lost that connection to our ancestors' way of life long ago. In our lifetimes most of us have never known what it was to work the soil, grow our own food, tell time by the position of the sun, or make our way home by the moon or stars. We do not know what it was like to live our days never traveling more than a few miles from our homes, or to illuminate the dark by the flicker of candlelight, living attuned truly to the cycle of the seasons, the rhythm of the land. Despite all of the modern conveniences with which our lives are blessed, we have, I fear, lost something irreplaceable.

For All That Is And Yet May Be 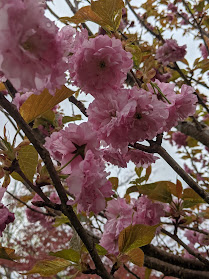 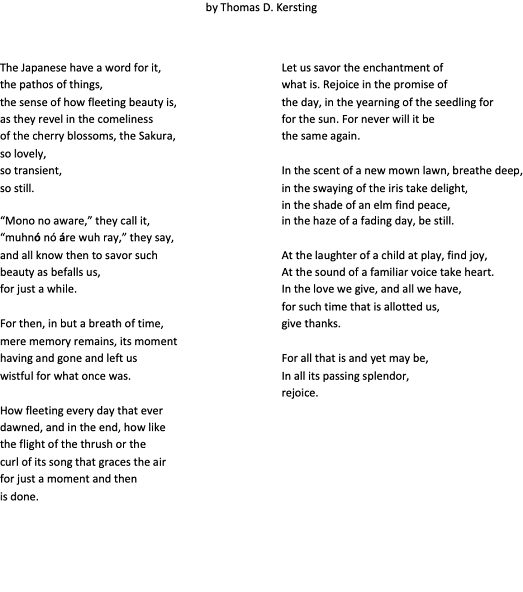 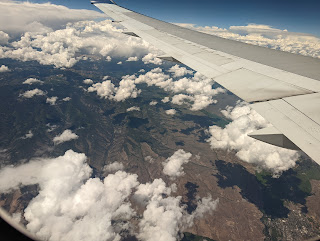 My wife wasn’t talking to me for a few hours, or more accurately, I wasn’t talking to her. Sometimes we’re blessed with the gift of serendipity, a moment of good fortune that falls into our laps like manna from the sky. I had such a moment recently when we were flying home from visiting the kids and grandkids in California. Rushing to load the bags into the car for the ride to the airport, I left my backpack behind. Not the catastrophe it might have been, for our boarding passes were loaded on my phone and our IDs were secure in our wallets. Besides, our son Dave would bring the backpack a few days later when he would be flying east. But both the book I was reading and my phone charger were in that bag. How would I pass the five-and-a half hours flying from San Francisco to New York? I could dive into my library of e-books on my phone but doubted my battery, already down to 60%, would last the journey.

Delta, it turns out, offers an array of in-flight entertainment from HBO, Showtime, Hulu, some network TV series, and a selection of featured movies. While none of them piqued my interest, what did catch my eye was a program that was to captivate me for the next 2,586 miles: a Master Class on writing by Amy Tan, author of The Joy Luck Club.

As my wife dozed in her seat beside me, I flew home with Amy Tan, who regaled me with reminders and new insights to the craft of writing. Her suggestion, for instance, that writers should not do too much research rang true for me as a writer of historical fiction. I recalled having gone down a rabbit hole when trying to date the invention of friction matches in the nineteenth century for my novel about the Irish Famine of the 1840s. Had they been invented yet when my characters lit a fire? I needed to know, and so I spent hours researching one link after another through the history and intricacies of sulfur and safety matches, which were a significant technological advance in their time. But how much of the research would I actually use in my story? Amy Tan’s advice to avoid needless details in research, then, was a timely admonition.

Her recommendation that writers keep a Nature Journal where we sketch what we see and consider its implications for story or essay was intriguing. While I’m not gifted with an artist’s skill, sketching what I observe will no doubt train me to notice details more closely. I liked, too,

Amy Tan’s assertion that every word in a story has a relationship to the rhythm of the next one since I’ve long been attuned to the sounds and rhythms of words in my writing. Her suggestion to break down the revision process to manageable components was also a useful tactic, and her views on the causes of writer’s block and strategies to avoid it were helpful. Finally, her thoughts on knowing how and when to end a story were particularly insightful for both new and seasoned writers.

I’d put Amy Tan on pause every hour or so to snap a shot of the Rockies over Colorado and to share a snack or talk briefly with my wife. But this Master Class so absorbed me through most of the flight that I hadn’t noticed the passing hours as we cut across the sky at nearly 500 mph, 34,000 feet high. Jotting notes on my phone, I was distracted from time to time by the fear that my battery would drain before the end of the class. Five-and-a-half hours later and three hours back in time, we landed at JFK with 6% left in my battery and what would turn out to be more than five pages of printed notes.

Later my wife complained that I hadn’t talked to her for most of the flight, and she was right, of course, for I was “in the zone, that magical, mystical sphere writers and artists and athletes are sometimes blessed to know when they’re immersed in their work, enthralled by it, transfixed beyond time. I was engrossed in a Master Class and flying home with Amy Tan.

Posted by Tom Kersting at 4:29 PM No comments: 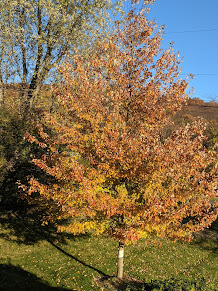 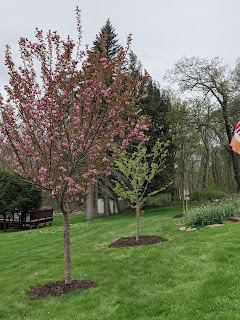 To Celebrate a Life

Long before I came to know them by name, I was only vaguely acquainted with trees. While not a single tree was to be found on the paved streets of our neighborhood in the Bronx, up on Fordham Road in a sliver of an island we called Banana Park, two or three trees graced a few benches with a canopy of shade. But as a city boy I could not tell you what types of trees they were. To me they were just trees.

On occasional jaunts to other parks in the area, we became acquainted with some variety among trees, mainly by the seeds they dropped. We gathered chestnuts in the Fall and pelted each other with “itchy balls” that dropped from the branches and clung miraculously to our clothes. We opened other seeds and made polynoses or twirled them like helicopters when we sent them aloft in Spring and dove headfirst into piles of leaves in the Fall, all the while blissfully unaware of the species that had dropped these treasures in our paths.

When my wife and I bought the house “in the country” some years later, trees, of course, abounded everywhere we looked. Over the decades I came to appreciate their species, their lifecycles, and their boundless beauty. We mourned the loss of trees to storms, infestations, and disease. We were ambivalent when the stilted willow that had served many years as first base in our backyard baseball games made way for the pool, but we lamented having to cut down the choke cherries and ash lest they fall on a neighbor’s house.

Over the years I have come to cultivate many trees, mindful that they will grow to imposing maturity after I myself have returned to the earth. I planted whips of poplar and ash, honeysuckle and lilac. More recently, I have planted twigs of hawthorn, buckthorn, and crape myrtle, all of which have sprouted hardy stems and leaves after four years of blazing New York heat and frigid winters. They’ll soon be ready for transplanting to more prominent areas of the yard.

I can think of no more fitting gesture to commemorate someone we love than the planting of a tree in that person’s name. Whether to mark a birth or a death, planting a tree celebrates a life in all its transient beauty and all its enduring memory. So it is that we plant a tree each time a grandchild is born. We planted a sugar maple when our Canadian American granddaughter Chloe was born in 2010 and a Kwanzan cherry tree when our Japanese American grandson Alex was born in 2017. This year we planted a Yoshino cherry to mark the 2020 birth of our Japanese American granddaughter Lilia. All three of these grandchild trees grace the yard with their distinctive beauty and celebration. The maple drops its helicopter seeds with which I may someday teach the children to make polynoses, and in the Fall its golden yellow leaves illuminate the dusk. The Kwanzan cherry sprouts its graceful pink blossoms in the Spring and, alongside it now, the Yoshino cherry opens its snowy white blooms. If the grandchildren are visiting in springtime, we may picnic beneath the cherry blossoms to celebrate their transient beauty.

It is with such transience in mind that I planted a clump of white birch trees to commemorate the life of John Palencsar, my closest friend of more than sixty years, who died rather sooner than we’d expected in 2021. John was fond of Robert Frost’s poem “Birches” with its idyllic image of a young boy swinging the pliable branches who “flung outward, feet first, with a swish,/Kicking his way down through the air to the ground.” I see that tree now, John’s birch, outside my den window, and I find comfort in knowing that, like those of the grandchildren, it is rooted firmly to mark a life, the “going and coming back,” in all its days of storms and resplendent beauty, to celebrate a life that once was, and—in all its seasons—a life worth remembering.