But this year, this September of 2010, was to be different. To mark the month that I would not be returning to school, and I suppose to afford something of a distraction from that long-ingrained routine, my wife and I booked a trip to Ireland for the first three weeks in September. I was in Dublin on the first day of classes back in New York, and I lifted a pint to my former colleagues, and toasted all the Septembers past and those yet to come. Something tells me it just may be the start of a new tradition.
Posted by Tom Kersting at 2:12 PM No comments: 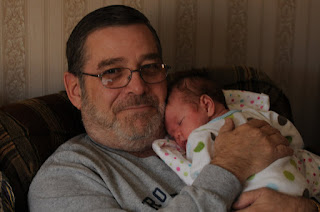 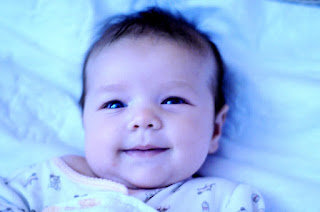 Her father's features in her face are winsome and uncanny: the puckering lower lip precedes a cry, the rapt gaze absorbs the world about her. And in her smile I see her mother too, the joy echoing in her eyes, with just enough of the "divil" to rouse some mischief in the years to come. Then there is the soft contented sigh when she is fed and swaddled and so thoroughly dependent upon the love that surrounds her, the love that in the end will last a lifetime.
So here I am once more cradling an infant in my arms, but this time it is our little girl that I hold, our Chloe´, and already I cherish the stories untold, the songs unsung, the books unread, the tops unspun, all memories still to be made. And I get to dream dreams yet undreampt for this little girl of ours, for they are grandpa dreams, and lifting to the sky on the wings of love, they know no bounds.
Posted by Tom Kersting at 1:40 PM No comments: