What's So Great About Gatsby?

Suddenly, like the glow of fireflies on a summer night, The Great Gatsby is everywhere. The Leonardo DiCaprio remake of the film has generated a renewal of interest in the story. Tiffany’s is advertising The Great Gatsby Collection, and Gatsby parties are suddenly the rage. While we might expect  a revival of the fashions of the period as well, the style and excesses of the Roaring Twenties do not account for the greatness of F. Scott Fitzgerald’s seminal work. Many astute readers make a case for The Great Gatsby as the “Great American Novel” for its tight story line, complex characterization, and luminous language. But in the end, the “greatness” of Gatsby lies not in the plot, or the glitz, or the age, but in the character himself.


What makes Jay Gatsby “great”? It’s not his mystique, though from the start there is an elusive aura of mystery about him.  Someone says he killed a man once, another that he’d been a German spy, still another that he’d served in the American army during the war, and some that he was a bootlegger. “It was testimony to the romantic speculation he inspired that there were whispers about him . . . ,” Fitzgerald tells us. And Gatsby himself seems intent on feeding the wild rumors. He’s the mythical masked man with a mysterious past who throws lavish parties “where men and girls came and went like moths among the whisperings.” He wanders incognito among his uninvited guests, there one minute, gone the next, which adds, of course, to the mystique of the man. Gatsby’s enormous wealth does not define his greatness either, for the extravagant preparations for his parties—like the uncut pages of the books in his library—are a superficial display meant only to impress Daisy Buchanan, the girl of his dreams.
Gatsby’s greatness is found, on the other hand, in his capacity to dream and his determination to pursue that vision, however improbable it seems. The narrator, Nick Carroway, says of Gatsby that there is “some heightened sensitivity to the promises of life” about him, “an extraordinary gift for hope, a romantic readiness.” Gatsby’s capacity for wonder, his pursuit of a dream wrapped in enchantment, is captivating and “great” in both scale and imagination. In one of our first glimpses of Gatsby we see him stretching out his arms over the dark waters of the bay toward the green light at the end of Daisy’s dock across the way, as if in homage to his ideal Beauty, the Golden Girl of his dreams. Having amassed a bountiful fortune in order to impress Daisy, he later dazzles her with the evidence of his newfound wealth, only to find that the moment is anti-climactic, as Nick tells us:
There must have been moments even that afternoon
when Daisy tumbled short of his dreams—not through
her own fault, but because of the colossal vitality of his
illusion. It had gone beyond her, beyond everything. . . .
No amount of fire or freshness can challenge what a man
will store up in his ghostly heart.
How does Gatsby’s dream differ from illusion? Well, perhaps it doesn’t, in a way, in that his pursuit of Daisy is not grounded in reality. Who could possibly live up to Gatsby’s idealized image of Daisy? Certainly not Daisy herself, given the shallowness of her character. He has in fact created an illusion of her, rooted in what she once was and in what he needs her now to be, the Golden Girl of his dreams. Yet, once Gatsby is reunited with Daisy, she cannot measure up to his dream and as with the green light at the end of Daisy’s dock, the enchantment vanishes. “His count of enchanted objects,” Fitzgerald tells us, “had diminished by one.”
The enchantment gone, the remnant of Gatsby’s dream has become a delusion as he squats beneath the bushes of Daisy’s window seeking to protect her from her abusive husband. Inside, she plots with him to abandon Gatsby to clean up her mess.
And so, we learn from Gatsby in the end that while great passion is admirable, great delusions may be lethal. Nick tells us in the final paragraphs of the novel that he
thought of Gatsby’s wonder when he first picked out the
green light at the end of Daisy’s dock. He had come a long
way . . . and his dream must have seemed so close that he
could hardly fail to grasp it. He did not know that it was
already behind him . . . .
Fitzgerald closes the book with the words that grace his own epitaph in a quiet little churchyard in Rockville, Maryland:
“So we beat on, boats against the current, borne back ceaselessly into the past.” 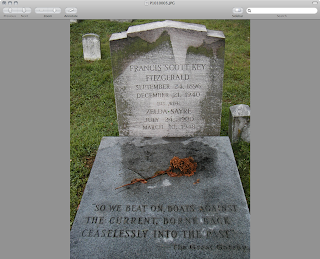 Posted by Tom Kersting at 7:52 PM No comments: