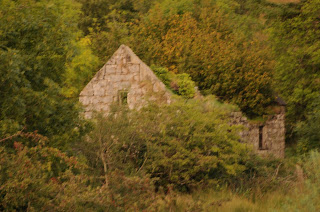 On some occasional rambles through my blog earlier this year, I came upon a path that had been calling me for quite some time. And so I’ve been away from these pages for the past few months, consumed with a historical novel that I’m writing.
The working title is Tobarmaire (Mary’s Well). The story is set in a fictionalized blend of Dowra, my wife’s native village in County Cavan, and the old village of Tobar nearby that had preceded it. It takes place in 1845-46 during the Great Famine (An Gorta Mor—The Great Hunger—as it’s known in Irish), when the potato blight ravaged the land.
Tobarmaire tells the story of Michael Corrigan, a fiery young man brimming with resentment as his family and neighbors, evicted from their cottages for non-payment of rent, face starvation.     I've been thinking and reading and writing about this story for quite some time. It began, for me, on a summer evening in Ireland in 1981, when Nan McGovern, my mother-in-law, brought me up Gubaveeny Mountain near her home in County Cavan to meet an old man who lived alone in a cottage. He was known in the region as a “shanachie” (pronounced “shanakey”), a sort of local historian who was said to have “a head full of knowledge about the history of the place.”
During ancient times, Gaelic clans lived in particular areas of rural Ireland. Evidence of that survives today when so many families in a region have the same surnames. And so, for example, to distinguish one family from another of the same name, a man and his own family would be known locally by his first name, then his father’s first name, then his grandfather’s first name, followed by the family surname. He would be known locally as Charley Thomas Ned McGuire, and his family (if he had one), as the Charley Thomas Ned McGuires, or more simply as the Charley Thomas Neds.
Charley Thomas Ned—Charley to his face—heard our car approaching and met us at the door of his stone cottage. Stooped, with a gray stubble and rheumy eyes, he greeted us through a mostly toothless grin in the dusty voice of his eighty-five years. “You’re very welcome,” he said to Nan, and turning to me, nodded. We sat before his open hearth, his only source of light. Many of the older folks on the mountain never had the electric hooked up when it came to the region in the 1950s—afraid of it, or just never seeing the need. The light of the hearth, for Charley Thomas Ned, was enough.
He recalled for us the history of the region as it had been passed down to him in the oral tradition in the years before tape recorders or television, and he regaled us with tales of a local hero who roamed the area nearly 250 years ago. Dick Supple (pronounced “Souple”) Corrigan was a “rapparee,” a highwayman who ran with a gang that robbed from the rich and gave to the poor. Through many daring exploits, Supple Corrigan bedeviled the English who oppressed the native Irish in the region in the late 18th century. He is remembered in legend and song in the northwest of Ireland to this day.
As the late summer dusk descended on the mountain, the turf fire in the hearth glowed brighter and Nan and I rose to leave. We thanked Charley Thomas Ned for his hospitality and his stories, and the old man replied in a lyrical echo of ages past: “Sure, and wouldn’t ye be happy of the visit if ye was sitting here all the week long with nary a Christian soul to cross yer doorstep?”
In Tobarmaire, my protagonist, Michael Corrigan, is the great-grandson of Supple Corrigan. Through a series of encounters, he seeks to settle some scores with the English during the famine of the 1840s, some seventy years after Supple had done the same.
So this is where I’ve been of late, consumed with the past in the present. I’ll be back with some more blog posts from time to time—I’ve just recorded a post at the radio station, which I’ll link to these pages soon. But if I’m away from the blog for a stretch of time, I’m probably just wandering the lanes of my imagination, thinking, researching, or writing about the characters and happenings of Tobarmaire.
Posted by Unknown at 4:28 PM